A riveting account of disgraced CEO Elizabeth Holmes and her doomed company Theranos, The Dropout is just short of impossible to stop watching. And when it ends after eight episodes, you'll still want more.

Starring so many familiar actors it's hard to name them all, the obvious standout is Amanda Seyfried who deserves an Oscar, an Emmy, a Golden Globe and whatever other awards exist for her no-holds-barred performance as the charming, duplicitous, sociopathic Holmes.

In case you've been on another planet for the last few years, the true story concerns a young, brilliant Stanford University student with a burning ambition to make her mark on the world. She does it by inventing a new blood-typing system that promises to revolutionize the medical industry. Somehow, at the age of 19, Holmes convinces lots of very rich people to back her start-up venture. (For example, Rupert Murdoch gives her $165 million.)

Finding success quickly, she leaves college before graduating -- hence the title -- and soon enough has hundreds of employees. Sadly, it's all a sham. The idea doesn't work but she keeps up the charade by lying and cheating, aided by her business partner/lover Sunny Balwani (Naveen Andrews), all the while imperiling the lives of patients whose doctors used her product for incorrect diagnoses.

Along the way we are treated to an inside look at the lives of the very rich, very selfish and very impressionable young people who worshipped at the twin altars of money and green kale smoothies. Holmes's ultimate downfall, many years in the making, is delicious. (Those smoothies apparently are not, but everyone drinks them anyway.)

See it on HULU. 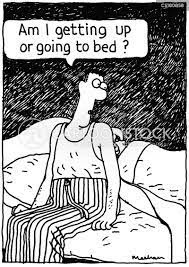 The brain is a funny thing. At least mine is. I can walk from the bedroom to the bathroom intent on getting something and forget what I wanted by the time I get there. Yet I remember quite clearly that today is my father-in-law's birthday. So what, you ask? Well, the father-in-law in question died 30 years ago, and at the time of his death I had been divorced from his son, also now deceased, for 20 years. So, doing the math, the last time I needed to know his birthday was a really long time ago. Still, every January 26th it pops up, clear as day.

I also remember, many years ago, having a one-night stand with a guy named Jerry in Vancouver, although I don't know who he was or how I came to meet him in Vancouver when I went there on a trip with a guy named Michael. It's not like Jerry and I had a big romance to last the ages; that one night was it. (It also pretty much ended things with Michael.)

Why we forget important things and remember trivial ones is a mystery. I am constantly amazed that my husband, at age 65, has total recall of every kid from his third-grade class, knows with whom and when and where he had his first kiss, first date and first sexual encounter, can remember which license plates he has seen and which are missing out of all 50 when we take a road trip and he plays that game in his head, and still leave his briefcase with all his work papers and his computer sitting at home this morning when he left the house for a business trip to Philly. And hey, that's not the first time. (One guess who noticed and then had to drive halfway to the airport, still in her PJs and having had only one cup of coffee and also having to pee but there wasn't time, to get it to him in time to make the flight.)

Anyway, what was I talking about?

Laughing Is So Old-fashioned 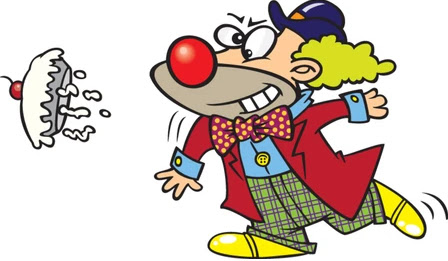 Sometimes, like when I am confined to my home with a contagious disease, I read my old blog posts just for a laugh. And I've noticed that the older they are, the louder I laugh. Which leads me to conclude that A, I was funnier when I was younger or B, life in general is worse nowadays. (I think both are true.)

Anyway, in order to restore some depleted self-esteem, I will try to write a post that is actually funny right here and now. All I need is a subject. But that's the tough part, since you're hardly allowed to make fun of anyone or anything in today's woke, pronoun-conscious-world. Like you can't mock fat people ("I'm not saying she's big, but her last picture had to be taken by satellite"), dumb people ("He's so slow, it takes him an hour and a half to watch 60 Minutes"), or anyone with a handicap ("My uncle has a glass eye." "Did he tell you that?" "No, it just came out in conversation").

As I'll sometimes do in such situations, I'll pull a Joe Biden and use someone else's material. Only I say outright that I'm stealing, which is what makes me different from Joe. Anyway, following are some jokes other people made up that might make you smile.

Death is just another way of saying, "Yesterday was the last day of your life."

It took a lot of will-power but I finally managed to give up dieting.

When he was born he was so ugly that the doctor slapped his mother.

That beach is so exclusive even the tide can't come in.

Raise your hand if you miss the days when girls were girls, men were men and Joan Rivers got away with murder.

The Oscars and Me

Something I have long suspected is now an inescapable fact: I am no longer part of society. For the first time in my life I have not seen even one of the movies nominated for this year's Oscars. This is odd since I do watch movies quite often, but I guess I'm watching ones that don't make big money and thus don't really matter.

Life Before the Internet

Before the Internet I never saw really fat people. I'm talking really fat people -- the grotesque ones who can barely move. Now photographs of them spring up in my face without warning, alarming and disgusting me, while "woke" people comment about the horrors of fat-shaming and how they are beautiful just as they are, which lets me know that besides the morbidly obese there are the morbidly insane or, at the very least, the morbidly misguided.

Before the Internet I wouldn't have known that many Americans, certainly half of them, don't consider Kamala Harris and Joe Biden to be nincompoops. I also would never have heard a lot of the dumb things those two say, as the newspapers and TV new shows clean that stuff up. Sadly, now I know that our VP is an idiot who really loves yellow school buses and POTUS is markedly feeble-minded. 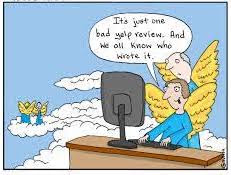 Before the Internet many of the people presently deceased would be alive instead of having fallen to their deaths while taking mountaintop selfies in order to post them online. In the old days there were no selfies; the word didn't even exist. Instead photos of us were taken by others and seen only by people we knew personally.

Before the Internet, total strangers we will never meet including many who live far away, sometimes in other countries, would never gain access to our home addresses, our phone numbers, our ages, the names and ages and addresses of our spouses and children and entire families, as well as where we work, where we have worked in the past and what other people may think of us.

Before the Internet, we took our chances when we went out to dinner and expected the best instead of knowing the worst about every restaurant, cafe, ice cream parlor and pizza parlor. We had our cars serviced and teeth cleaned and heads examined by people we heard were good at it, and shopped at places nearby or those that were highly praised by friends and family.

Life was better then.

Now that I've had Covid for almost five days, my brain is definitely showing the effects. Called "brain fog" by some, it's a top symptom. But surely the biggest symptom is fatigue, exhaustion and every other word you can think of meaning no energy.

I'm pissed because after dodging the disease for almost three years, I'm pretty sure I contracted it last week at a lunch I wrote about with the horrible woman (and her horrible husband) who never STFU for a second and so her germs were being propelled all over me for almost two hours. My only consolation is that she has it now too.

Well, I've had a pretty good run since it first showed up in 2020, avoiding it even when my husband contracted it, but Covid finally got me yesterday in the middle of my afternoon walk. My symptoms were mild enough to confuse them with just a cold, but severe enough this morning to warrant taking a test that turned out to be positive.

Since I am in the group considered to be "high risk," owing to my age (over 65) and comorbidity (heart disease), I called my doctor looking for some sound advice as to how to proceed. I didn't get any. Or rather, I got some but it might have been from his lawyer.

A chatty nurse I spoke with at length stressed the need for me to wear a mask at all times in my home as I isolate for the next five days. This seemed to be of utmost importance. But as to whether or not I should take an antiviral medication, something I would like to avoid because of its unpleasant side effects, and which must be started within five days of the onset of symptoms, the advice was murky at best. She said she would contact my doctor and get back to me with his decision. Several hours later his word came back: "Okay."

Okay what? Okay, take an antiviral medication? Okay, don't take it and wait to see if my symptoms worsen? Okay, I tested positive and have Covid? Could she clarify, I asked the nurse. She said, "He literally said "Okay."

Amanda Seyfried and Naveen Andrews A riveting account of disgraced CEO Elizabeth Holmes and her doomed company Theranos, The Dropout is jus... 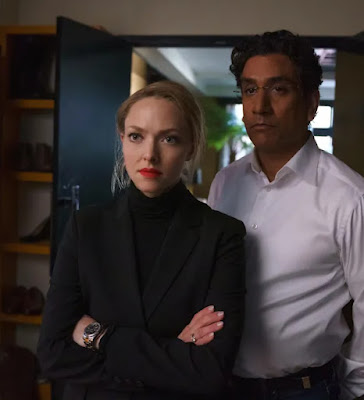